At the very outset, let me clarify that I’m not an environmentalist. Neither am I affiliated to any political party, though I’m likely to get branded as a Maoist after writing this article. I’m just an average twenty year old who has grown up in Calcutta and learnt to love the city and the state. And my curiosity propels me to question the numerous anomalies that I notice all around me. At this point of time, I think it is also of significance to mention that I’ve been working with a Non Governmental Organization of considerable repute, which strives to provide a better life to underprivileged kids belonging to the lower strata of society. This organization works hand in hand with the Kolkata Police, since many of these kids are rescued from situations where they are being beaten and tortured at home, or are being rehabilitated after committing minor crimes or resorting to substance abuse.
5th June. World Environment Day. A concept which has never been too popular in India. However, times are changing. Ever since Mamata Banerjee took oath as Chief Minister of West Bengal, she has promised to make Calcutta the equivalent of London, and Darjeeling the equivalent of Switzerland. Apart from the minor differences in weather, she has taken the rest all upon herself to ensure this happens. Which means, just like the West, it is now imperative for the state to celebrate World Environment Day. Fair enough. As long as it is benefitting the environment and the people, I see no reason to complain.
I was told to report to the Gariahat Police Station at 7.30 in the morning to help the NGO with a rally in support of the environment. When I asked how it is related to child rights which is supposed to be my only concern as an intern for the NGO, I was told that the police supports all our work, and hence it is our duty to support them when they ask for it, regardless of whether it is related to child rights or  not. So I arrived at 7.30 only to be greeted by a cop sitting languidly with a bunch of street kids. Gradually, however, the kids were brought in to fill up a bus, and by the time it started moving it was 8.45.
The rally was supposed to start at Harish Mukherji Park. However, due to the incompetency of one of the policemen who was guiding the driver, we managed to reach the Maidan. After waiting for a quarter of an hour, somebody had the bright realization that they had reached the wrong destination. So, everyone packed inside the bus again, and it left for Harish Mukherji Park. By the time we reached Harish Mukherji Park, the rally had already left. The same bright policeman was now struck with the idea of making the bus somehow catch up with the rally. So, once again, the bus turned and started moving towards Rabindra Sadan. By the time we reached Rabindra Sadan, the rally had come to an end and the people had already dispersed.
Everyone was handed an ID card of sorts in support of the environment and given free t-shirts, blue and white, like the rest of the city with the government’s name, and “World Environment Day: In Support of a Green Economy” printed in green. They also received caps with similar colours and designs. At this point of time, I’d like to point out that the recipients of these t-shirts are mostly illiterate and had no clue as to why they were there in the first place. They had been promised free food, and they had obliged by showing up. As people were told to put on their t-shirts, they haphazardly removed the plastic covers and threw them on the floor. The organizers of the event and the police stood watching, but no-one said a thing, as the entire area got strewn with plastic packets. So much for the environment!
Everyone was lined up, and made to enter the auditorium where a few hundred, maybe thousand, people, mostly people from the lower strata of society and party workers, were seated awaiting a special programme organized by the state government for World Environment Day. In the background, Tagore was playing, as nothing in this state is complete without flaunting a bit of our culture, is it? Interestingly, the previous day, when I had shown one of the kids a picture of Tagore and asked him if he knew who it was, he had no idea whatsoever. This kid, and several others like him, was now seated as part of this elite audience.
The dignitaries involved included the Commissioner of Police, the Minister of Commerce and Industries, Mr. Partha Chatterjee, the Minister of Transport, Mr. Madan Mitra, and the likes. Due to Mr. Chatterjee getting delayed, the audience were made to wait endlessly. Meanwhile, the master of ceremonies ranted on about the environment. She exclaimed how her son in Switzerland had told her about the steps taken by the Swiss government to cut out noise pollution, and how she felt the same must be implemented here. The mere mention of “Switzerland” excited more than half the audience, most of who are financially incapable of travelling beyond the borders of the city.
In the midst of such high end drama, I couldn’t help but notice the huge flex in the background with the government’s proclamation of aid to the environment taking up half of it, while Mamata Banerjee’s face covered the rest. Splendid use of resources to commemorate the occasion. Also, on stage, were a group of colour co-ordinated (white, blue and green) women who were present to sing and entertain the audience. As if the recorded Rabindrasangeet hadn’t already quenched my thirst for music on a day which almost hit 40 degree Celsius and the humidity was more than 80 percent. 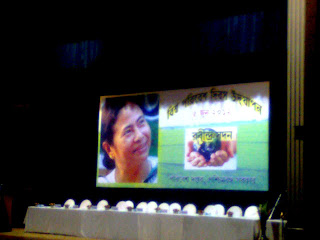 The stage before the ceremonies began

It was at this point of time that I felt I had had enough trash for a lifetime and decided to leave the auditorium. I have always avoided Ekta Kapoor serials, so clearly there wasn’t any need for me to subject myself to something a hundred times worse. As I walked outside, I noticed how the entire area was full of plastic packets, food packets, and disposable glasses.
Too tired to really care about anything else in the world, I hailed a cab and started moving towards my house. But apparently, the show was yet to go on. As I sat in the cab which was as stationary as the leaves on the trees, I noticed a truck which had been covered with flexes on all sides. They all said the same thing. “Save the Environment- An Initiative by the Government of West Bengal”. And on the truck was a tree. Yes, that’s right. A tree. And then I noticed the second truck. And the third. And so on. In their effort to promote the environment, the government had put a tree on a truck and was making the truck go all around the city. Screw the rising price of diesel and the emissions they were producing. The West Bengal government might have a debt of 200000 crore INR, but they can afford the price of diesel, and as long as the public are left in awe of a moving tree, they don’t mind polluting the air as well. So now we can add air as well to the limitless list of things in the state which have been polluted by the government. 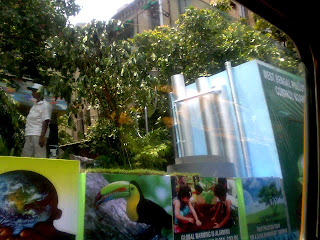 The truck with the tree... Spreading “greenery” in the city

As I finally reached home and rushed towards the comforts of my room, I couldn’t help but spare a thought at the amount of resources which had been wasted for putting up this show. Right from printing flexes with our honorary Chief Minister’s face on it, to providing free t-shirts, caps, identity tags and food. All the paper, paint and other resources which had been used. And all the litter which would have accumulated by the end of it.
Now, as I’ve mentioned earlier, I’m not an environmentalist. Nor do I have a hidden political agenda. Out of all the happenings of the day, I was most disturbed by the fact that I had to wake up at 7 am for something as nonsensical as this. But by the end of it, I was left with another thought.
For the past one year, the newly elected Trinamool government has been trying to eliminate all traces of red and make West Bengal a green state. From banning Marx in schools to asking people not to marry into families with CPI(M) members, and even changing the name of the state, they have gone out of their way to provide the state with an identity which is completely different from the one which we have had for the three and a half decades which preceded that. However, on the occasion of World Environment Day, the city of Calcutta was filled with various colours. And green definitely wasn’t one of them.
Posted by Rajdip Ray at 03:49